DALCHA IS THE KING OF THE WORLD 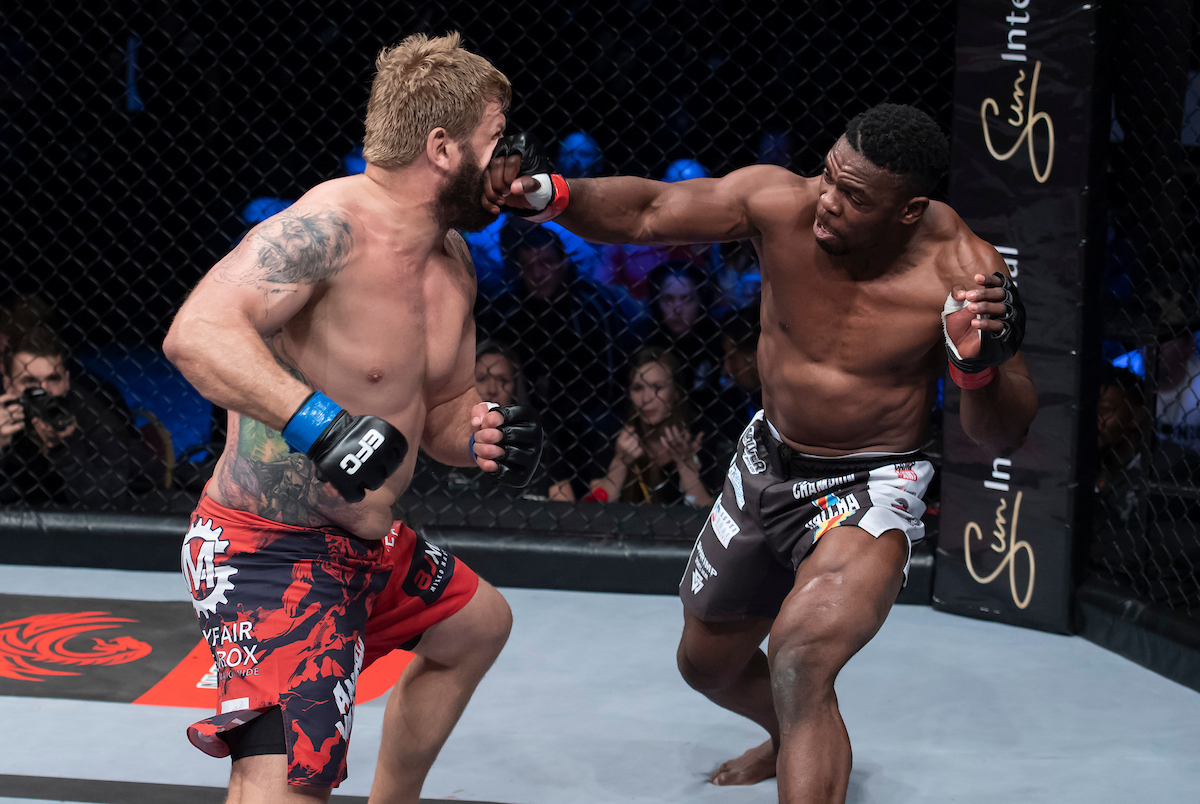 Johannesburg, South Africa – An incredible chapter was written in the history of the EFC organisation tonight, when the DRC’s Champion Dalcha (9 – 1) did what had been almost universally ruled as impossible, and downed the EFC heavyweight champion, Andrew Van Zyl (19 – 4), who carried a near 20kg advantage. In the night’s co-main event, celebrated striker and ruthless EFC flyweight champion, Nkazimulo Zulu (9-2-1) defeated Brazil’s Magno Alves (4-8) to retain his title.

The tension was unbearable as the self-proclaimed ‘Wakanda Warrior’, light heavywight champion Champion Dalcha, entered the Hexagon to deafening cheers from his Congolese faithful. Moments later, the other half of the auditorium screamed their support when the legendary Van Zyl entered the arena.

Dalcha was facing the impossible, a man 20kg his heavier, a decorated Brazilian Jiu Jitsu blackbelt and seasoned heavyweight champion, and wasted no time in his pursuit of victory.

The first round saw Dalcha unleashing creative punch combinations that continually landed on what is still Van Zyl’s granite jaw, blooding the champion and landing a sensational Judo takedown.

Going into the second Dalcha continued to show that his lighter weight and speed was in fact a devastating weapon, and that he had the Judo skill and ground technique to frustrate Van Zyl’s classic top contol and ground and pound technique.

The behemoths traded massive blows that Dalcha certainly got the better of. A frustrated Van Zyl landed a suplex, but was unable to capitalise, and went into the second break seemingly two rounds behind.

The pattern continued throughout – Dalcha smashing an impassive Van Zyl jaw with thunderous strikes, a takedown from either translating to Dalcha in Van Zyl’s guard with both trading short elbows, and Dalcha ahead.

It was in the fifth that Van Zyl changed from his infamous ‘One Gear’. No doubt knowing a finish was his only chance at victory, he hunted a circling Dalcha relentlessly, finally landing smashing short range strikes, but it was too little, too late.

The exhausted warriors were caught by the final buzzer. Dalcha took an immense double title by split decision – one that most would instead see as a unanimous for the Congo’s hero.

Dalcha becomes the EFC organisation’s third double champion – after Dricus Du Plessis and Amanda Lino, and now stands at the very top of the roster of champions, ready to take on the world.

EFC flyweight champion Nkazimulo Zulu entered the hexagon to roars from his home crowd, Brazil’s Magno Alves waiting to face him on just a week’s notice. Zulu carries a deadly reputation, acknowledged as one of the world’s great strikers with a string of brutal KOs behind him.

Alves stunned all with a quick takedown and a succession of heel hook and knee bar attempts. A dead quiet crowd watched Zulu defend one after the other. Alves could not finish, and as soon as Zulu had both feet free he set about landing ferocious punches from top position, forcing referee Brad Bloch to dive between them 4:18 into the first.

Zulu has sent two previous opponents straight to hospital, and it seemed he had done so again, until an unsteady Alves finally regained his feet.

Port Elizabeth’s Luthando Biko took on the undefeated Steven Goncalves, a win for either breaking them into top five status in the division. Biko found himself at a massive reach disadvantage, but bringing stocky power and dynamic footwork to the fight.

Biko quickly showed that he was able to get to the inside, landing a right hand and a spinning back kick to the head, cutting Goncalves early. The action quickly settled into a stalemate against the fence, which continued into the second round. Going into the third, on the back of a near triangle choke by Goncalves, it seemed a round a piece.

In the third Biko continually attempted to control from top position, but Goncalves refused to give up his guard, threatening submissions and landing strikes repeatedly. It was a hard fought battle that the judges ultimately awarded to Biko by split decision.

Cedric Doyle made his long-awaited return against the Congo’s Trezeguet Kanyinda, and if anything brought a more devastating game after his two-year layoff.

He opened the bout with a brutal takedown, and added two cracking overhand rights, a further takedown, and apart from sitting out a guillotine choke attempt, dominated the round and nearly finished with a rear naked choke at the buzzer.

The second saw Doyle in control once again, hammering elbows from side mount before Kanyinda retaliated with an illegal knee to a grounded opponent. Doyle took his full five minute rest period while Kanyinda was docked a point. The round continued with Doyle in control, threatening with multiple submissions.

Doyle finally finished it by TKO in the third, after once again taking Kanyinda down and dropping brutal ground and pound. At the post event press conference, it was revealed that Doyle was given the option of taking victory by DQ to his opponent, but he preferred to finish the fight instead.

Both traded even strikes throughout the first, enjoying a blistering fight.

The two ratcheted up the pace in the second, smashing each other with fluid punch combinations that saw neither pull ahead. Coxen succeeded in a takedown midway through the second, but still they could not be separated, as the blood flowed and it seemed the arena was split in two with deafening roars for both men. The second ended with a standing ovation.

The third settled into a give and take battering finally settled by the judges. Seabi was awarded winner by split decision, but it was a bout where both wrote their names in the history books.

Performance bonuses were awarded to Rocky Illunga and Marcel Els. Additional bonuses went to Warren King, TC Khusu and Mark Kamba. Fight of the Night was awarded to Pietie Coxen vs Conrad Seabi.

The official EFC 71 results are:

Nkazimulo Zulu defended his EFC flyweight title against Magno Alves via TKO (strikes) 4:18 into round 1.

Cedric Doyle defeated Trezegut Kanyinda via TKO (strikes) 3:46 into the third round.

Warren King defeated TC Khusu via tapout (Heelhook) 2:42 into round 2.

Mark Kamba defeated Elvis Ngwalangwala via KO 0:42 into round 1.

All eyes now turn to EFC 72 Van Staden vs Mazany is presented by Betxchange.com and takes place on Saturday 11 August live from GrandWest, Cape Town. Tickets are on sale at computicket.com, and the 5 main card bouts will be broadcast live on Kwesé Free Sports 1 (Kenya & Rwanda), Kwese TV (Sub-Saharan Africa) and live in South Africa on SABC 3 starting at 21:30 (CAT). Full broadcast details available on efcworldwide.com. Prelim fights will be available for free on the official EFC Facebook page.