#ANDNEW, MAZANY DOES IT AGAIN 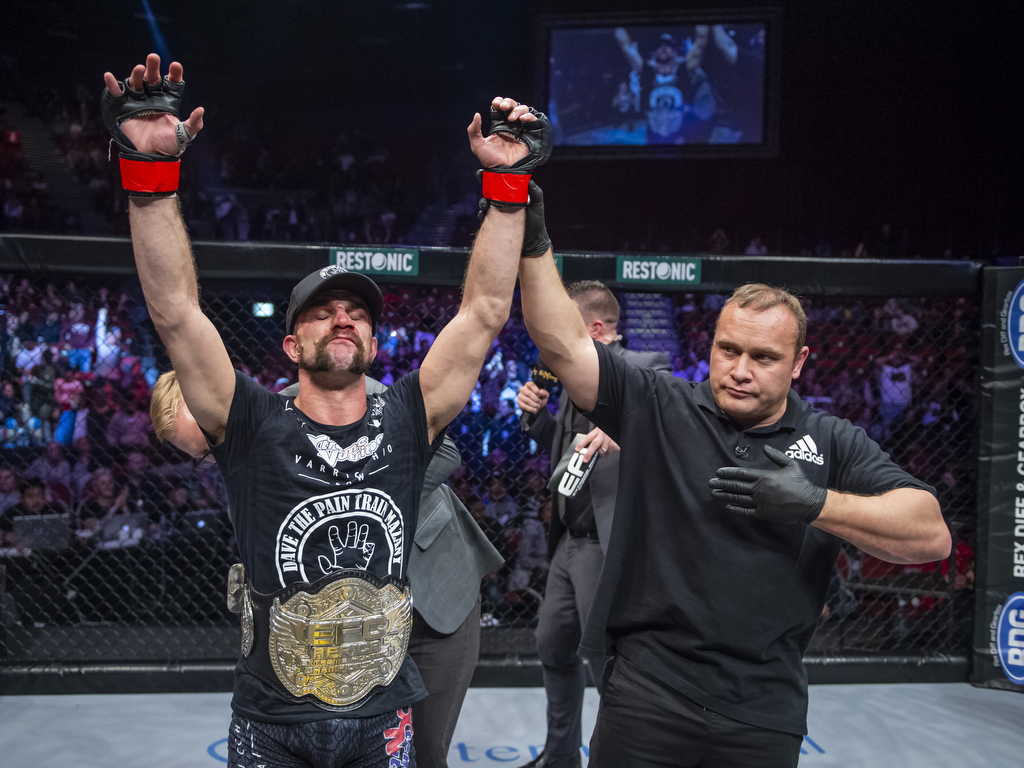 Their bout was controversial, and the epitomy of hard-fought and intelligent MMA. Van Staden always possessed the striking advantage, with an incredible 16 knockouts to his name, while Mazany was always tipped as the superior wrestler. The fight played out in precisely that way, fought at a knife edge.

Mazany immediately opened his account with a clinch against the fence, an eventual takedown, and limited ground control. Van Staden responded with an eventual get-up, and strikes from open space that alternately grazed the challenger, or sent him wobbling.

Neither man could complete his style of onslaught, and each made small inroads into the other. As the rounds progressed, Van Staden gained the odd small victory in the clinch, and Mazany scored strikes of his own from time to time. And so it continued, the only defining feature Van Staden being docked a point for fence holding.

The battle was savage and tension-filled from start to finish. When the two men lined up for the judges decision, the result was absolutely unknown, an even battle in which both men left their hearts on the canvas.

The ruling was delivered 49-45 Mazany, 46-48 Van Staden, and 49-45 Mazany, unleashing a torrent of boos. The bout was extraordinarily close, and ultimately Mazany was given the nod through superior control, but the red herring decision fanned the controversy.

At the post event press conference Van Staden was understandably upset, and EFC President Cairo Howarth confirmed the intention to book a rematch as soon as possible.

In the evening’s penultimate bout former EFC light heavyweight champion Gideon Drotschie made a long-awaited return, now in the middleweight division. He faced the UK’s Jenaid Ebanks, a man on a redemption trail after an underwhelming performance in the reality television show ‘The Fighter’.

Drotschie proved that he belongs in the lighter division, meeting Ebanks head-on in every area of the fight. Both men threatened with submissions, powerful strikes and dominating ground and pound.

As the rounds rolled on it became a war of attrition. Drotschie suffered a deep gash at the start of the third, forcing a pause, and from there the warriors pushed past fatigue to create an incredible fight.

As the final seconds ran down the crowd rose, pounding seats with their feet in appreciation of two men that left absolutely everything in the Hexagon.

Drotschie versus Ebanks is a fight of the year contender. Drotschie took the bout via unanimous decision, sealing his place in the new division, but at the same time revealed a near equal presence in the UK’s sensational Jenaid Ebanks.

The legendary Tumisang Madiba made his return after a year’s plus absense, to take on the up-and-coming Cape Town superstar Faeez Jacobs.  Both are proven fighting acrobats, but pre-fight sentiment pegged the battle at Madiba’s experience giving him the edge. Cape Town’s storming Jacobs proved them wrong.

Madiba started strong, maintaining control on the fence and ground, but midway into the first the fire of Jacobs began to take charge, controlling the technical exchanges, and revealing a massive evolution since his loss against Pacino. He finished Madiba with a rear-naked choke, 4:31 into the first round.

Capetonian Justin Smith has a massive local following, despite his main card debut, and raised the roof with an AC/DC ‘thunderstuck’ fueled entrance. He delivered, with a blizzard of hooks that immediately battered a tough-as-nails Pretorius.

Pretorius set his chin, and despite multiple welts spinging up across his head and neck, traded with the steaming Smith. But the momentum and power of Smith was too much, and 3:36 into round 1 Pretorius dropped to a straight right, with the crowd baying at the finish.

Smith has made an emphatic statement; on only his second fight showing himself ready for upper division competition, and sending a message to every welterweight athlete.

Matunga Djikasa and Willem Smith kicked the main card off with a heavyweight, karate stylist versus boxing pedigree matchup. Smith immediately went against type, steaming in with a single leg takedown attempt, and straight into Djikasa’s waiting guillotine choke. Soon Smith was out cold on the canvas, and Djikasa was celebrating his first main card appearance and win.

Fight of the night went to Drotschie versus Ebanks. Performance bonuses were awarded to Justin Smith, Giovanni Pretorius, Faeez Jacobs and Hermie Drotschie.

The official EFC 72 results are:

Justin Smith defeated Giovanni Pretorius via knockout 3:36 into round 1.

Anthony Mailer defeated Duane Jones via KO 0:27 into round 2.

Hermie Drotschie defeated Francois Kundari via tapout (armbar) 1:35 into round 1.

Serge Kasanda defeated Chris Dove via TKO (strikes) 2:15 into round 2.

All eyes now turn to EFC 73 Kalunda vs Da Rocha, Moyo vs Vanderaa is presented by Betxchange.com and takes place on Saturday 8 September live from Sun City, Northwest. Tickets are on sale soon at computicket.com, and the 5 main card bouts will be broadcast live on Kwesé Free Sports 1 (Kenya & Rwanda), Kwese TV (Sub-Saharan Africa), SABC 3 (South Africa), FIGHT SPORTS (Where available) & EFCworldwide.tv (Where available) starting at 21:30 (CAT). Full broadcast details available on efcworldwide.com. Prelim fights will be available for free on the official EFC Facebook page.