KALUNDA DOES IT FOR AFRICA 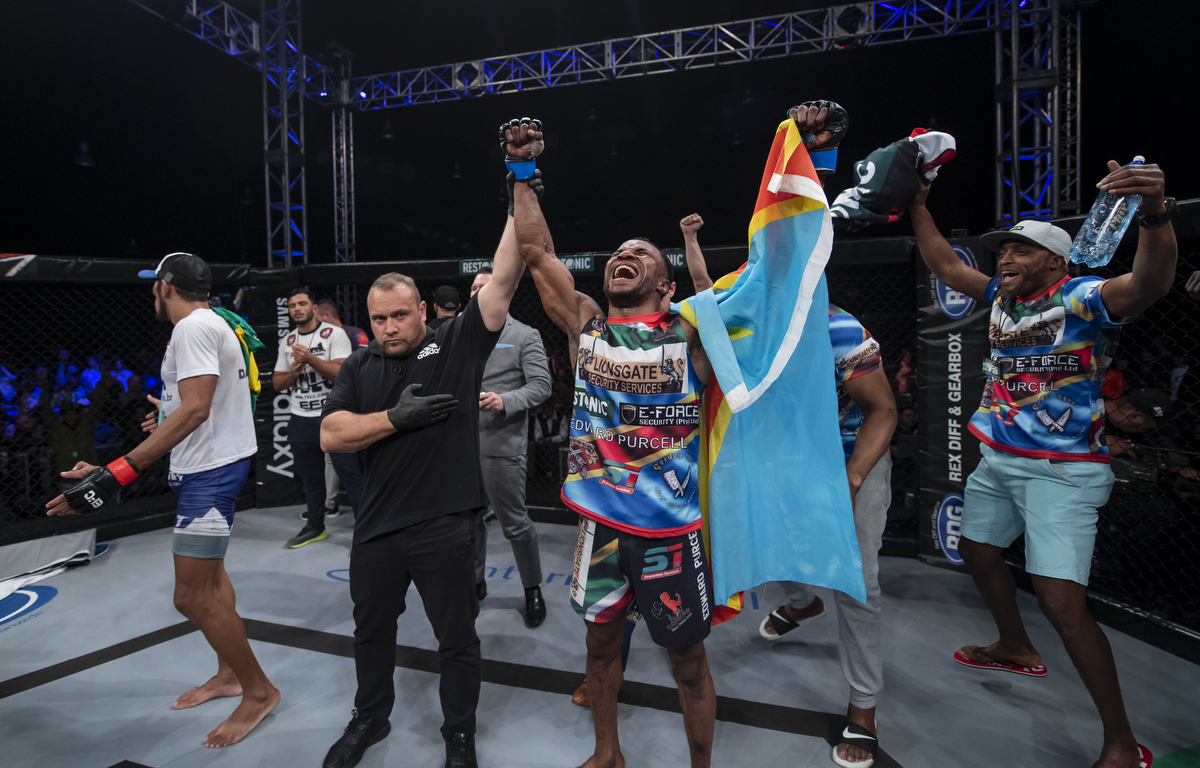 North West, South Africa – The DRC’s Gunther Kalunda (5-0) was crowned the EFC interim welterweight champion at EFC 73 this evening, when he defeated Brazil’s José Da Rocha (9-5) in a gut-wrenching five round war.

Bookmakers had pegged Da Rocha as the favourite, and much public sentiment concurred, expecting the Brazilian to dominate with a superior skillset. Kalunda did not agree.

The first round saw both trading strikes before Da Rocha scored a takedown. It was not long, however, before Kalunda made his way back to his feet, setting a pattern that would create a fight that would take both men to the limit.

Early in the second Kalunda sank a guillotine, forcing the Brazilian to dig deep and ride it out. Thereafter the men went head to head on the feet and the ground, Da Rocha displaying superb head movement. The end of the second seemed the end of Da Rocha also, with the Brazilian visibly exhausted.

The third round revealed just how tough the Brazilian is. Kalunda took his opponent down against the fence, took his back, and forced Da Rocha to ride a succession of deep rear naked chokes for near on three unbelievable minutes. It was Kalunda’s illegal use of the cage that allowed Da Rocha to regain his feet, with the referree standing them up.

In the fourth Da Rocha found a second wind, threatening with superb stikes, but his rally was short lived. The power of Kalunda stifled the Brazilian. Going into the fifth it could be argued that it was two rounds a piece, but Kalunda soon took control of the round with a takedown and top control, finishing the bout strong.

The judges delivered a unanimous decision, crowning an incredible third EFC champion for the Democratic Republic of the Congo.

“I don’t fight just for my country, I fight for all of Africa,” shouted an exhausted Kalunda, bringing the crowd to their feet.

Elvis Moyo and Jared Vanderaa were expected to put on a striking display, and the first round of their heavyweight clash delivered. Vanderaa scored multiple counter-strikes and had major success with a crunching leg kick. But Moyo was always in it with stinging blows, his favourite left hook marking Vanderaa.

It seemed that the men were settling into a strking battle, when Moyo closed the distance close to the opening of the second, and allowed Vanderaa to take full mount. The American pounded the head of the Zimbabwean for a good minute, until the referree put an end to it.

Vanderaa has scored a sensational comeback victory after his loss to Van Zyl, and is another man eyeing the new man Dalcha at the top of the division.

Sizwe Mnikathi versus Steven Goncalves was always a war in the offing, and the two went at each other from the buzzer. Mnikathi landed a massive overhand right, taking Goncalves to the ground, which proved to be a mistake. Goncalves turned on the jiu-jitsu, taking Mnikathi’s back and sinking a merciless rear naked choke.

EFC veteran Anicet Kanyeba entered the hexagon for the 19th time, to face Cameron Pritchard who had made a fresh cut to lightweight from welterweight.

Betting odds had Kanyeba as the underdog. The Congolose heavy-hitter showed his contempt for sentiment, flattening Pritchard with strikes a blistering 32 seconds into the first round. This is Pritchard’s second shock knockout on the trot, and he must be reeling.

Heavyweights Ricky Misholas and Juan Bezuidenhout opened the main card. The legendary Misholas entered the bout with a massive chip on his shoulder, making the fight personal due to Bezuidenhout training with Misholas’ Congolese compatriot and simultaneous EFC heavy and light heavyweight champion, Champion Dalcha.

The bout began tentatively, both gauging range, and it was in the second round that the men pulled the trigger. Strikes flew, both landing but missing with the massive blows. Suddenly Bezuidenhout executed a superb takedown, that was immediately reversed by Misholas, taking half guard and the opportunity to nail Bezuidenhout to the canvas with brutal elbows.

Misholas is getting better and better, and his name is naturally surfacing as a possible opponent for the champion.

Performance bonuses were awarded to Tshilumba Mikixi and Pierre Botha for their three round war, Asiashu Tshitamba and Anicet Kanyeba for their knockouts, and Gunther Kalunda and José Da Rocha for their five round title fight.

The official EFC 73 results are:

Jared Vanderaa defeated Elvis Moyo via TKO (strikes) 2:00 into round 2

Anicet Kanyeba defeated Cameron Pritchard via knockout 1:32 into round 1.

Ricky Misholas defeated Juan Bezuidenhout via TKO (strikes) 4:52 into round 2.

Matunga Djikasa defeated Kevin Koekemoer via knockout 0:14 into round 2.

Amisi Kayeba defeated Danie Swart via TKO (strikes) 1:46 into round 1.

All eyes now turn to EFC 74 Kabesa vs Murrie for the featherweight title, presented by Betxchange.com, and takes place on Saturday 6 October live from Carnival City, Johannesburg. Tickets are on sale soon at computicket.com, and the 5 main card bouts will be broadcast live on Kwesé Free Sports 1 (Kenya & Rwanda), Kwese TV (Sub-Saharan Africa), SABC 3 (South Africa), FIGHT SPORTS (Where available) & EFCworldwide.tv (Where available) starting at 21:30 (CAT). Full broadcast details available on efcworldwide.com. Prelim fights will be available for free on the official EFC Facebook page.