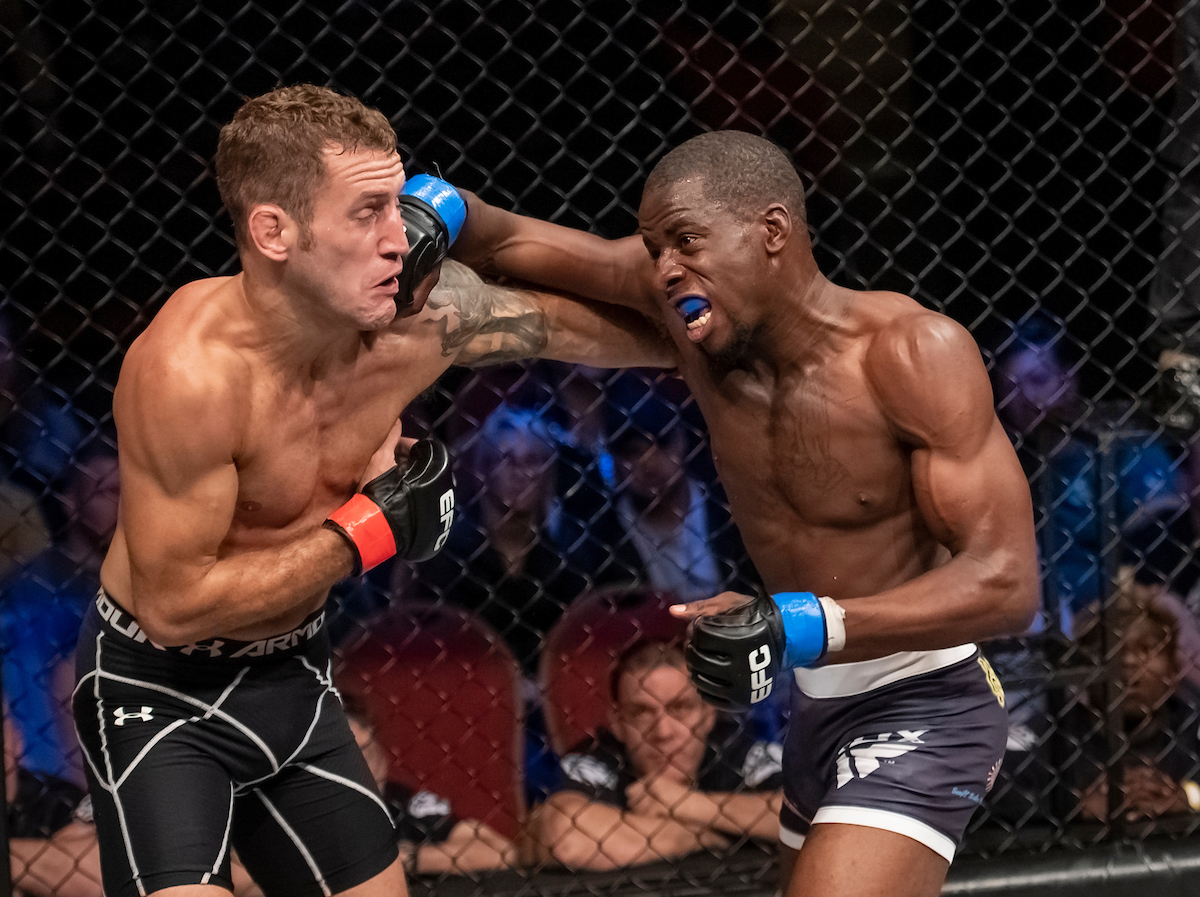 The champion flew out of the starting blocks, putting the Scotsman under relentless striking pressure coupled with a strong clinch game against the fence. Murrie constantly threatened to pull guard, but Kabesa refused to enter the Scotsman’s jiu jitsu game, resulting in Murrie hanging off of the champion for much of the round. A crunching Kabesa knee to Murrie’s chin ended the first.

In the second Murrie’s guard pulling attempts nearly paid off with a flying armbar, but Kabesa defended and responded with a brutal hip throw to end the round, smashing the challenger’s head into the canvas.

The fight settled into the same clinch against the fence dynamic, punctuated by brutal strikes in open space from the champion. In the fourth, Kabesa landed a body kick that doubled the Scot over, followed with a hook that smashed his head back, and then his trademark spinning back elbow that had Murrie wobbling on his feet – but still the Scot kept coming.

The bout went five rounds. Kabesa showed himself to be a consumate champion, nullifying Murrie’s submission talents and dominating him with strikes and pressure against the fence. Kabesa defended his belt by unanimous decision.

Dusseldorf’s ‘German Tank’, Max Merten, entered the Hexagon to face South Africa’s Conrad Seabi in the evening’s penultimate fight. Seabi is a proven striker, while Merten has yet to show the form that landed him on a spot on season one of the reality television show ‘The Fighter’.

Seabi quickly took control with superior movement and punch volume. Merten threatened with an overhand right, but couldn’t compete with Seabi’s fluid angles, and a particularly punishing jab that snapped the German’s head back repeatedly.

Seabi settled behind his jab for the second round and then unloaded with sensational overhand right midway through the third, dropping Merten, and finishing him with ground and pound.

Zimbabwe’s Sylvester Chipfumbu made his return after his title contention loss to flyweight chanmpion Nkazimulo Zulu (a fight that sent him to the surgeon’s table), and made a sensational comeback.

Madiba’s extreme aggression carried him to midway through the second round, where Chipfumbu landed a takedown and dominated with ground and pound to close out the round. The third opened with another attack from Madiba that Chipfumbu turned to a takedown and an immediate sinking of a rear naked choke, to take the fight.

“I’m back!” screamed an elated Chipfumbu, a year of intense trials etched on his face.

A double debut and new injection into the women’s division was the second fight of the main card, with the USA’s Vlismas facing Poland’s Wójcik. The women had generated a ton of animosity in fight week, and it showed with them flying at each other at the starting buzzer.

Vlismas seemed to have control early on, but Wójcik proved her toughness with multiple deep submission defenses.

The second round turned into an epic stand-up battle. Both women tagging each other repeatedly, Wójcik landing clean punches and Vlismas adding to her own tally with brutal body kicks, and a slick takedown to end the second.

The third round opened with no clear leader and both fought tooth and nail to the final buzzer. It was left to the judges to separate the two, an unenviable task. A split decision victory went to Vlismas in a fight that no athlete should have lost. The women took fight of the night honours, and huge respect on their respective EFC debuts.

Angola’s Nerick Simoes walked out as the underdog in his main card debut against specialist wrestler Pierre Botha.

The two put on a scorching first round, battling on the feet and the ground with multiple scrambles, but it was the more experienced Botha that quickly took control and used his wrestling acumen to maintain it, smashing Simoes with hard hammer fists.

The second round delivered the same pattern – Simoes throwing all he had at the fortress of Botha’s top control. Even a near armbar from bottom couldn’t shake Botha’s onslaught, who simply lifted the Angolan and slammed him out of the submission attempt.

But Simoes was far from finished, and in the third strategic inside leg kicks began to slow the wrestler. Simoes fought a courageous round, but ultimately the skill of Botha was too much who took the fight by decision.

Fight of the night went to Vlismas vs Wójcik and performance bonuses were awarded to Tumisang Madiba & Sylvester Chipfumbu.

The official EFC 74 results are as follows:

All eyes now turn to EFC 75 Zulu vs Joshua, Biko vs Ellenor and is presented by Betxchange.com, and takes place on Saturday 3 November live from GrandWest, Cape Town. Tickets are on sale at computicket.com, and the 5 main card bouts will be broadcast live on Kwesé Free Sports 1 (Kenya & Rwanda), Kwese TV (Sub-Saharan Africa), SABC 3 (South Africa), DAZN (USA), FIGHT SPORTS (Where available) & EFCworldwide.tv (Where available) starting at 21:30 (CAT)/12:30 (DST). Full broadcast details available on efcworldwide.com. Prelim fights will be available for free on the official EFC Facebook page.