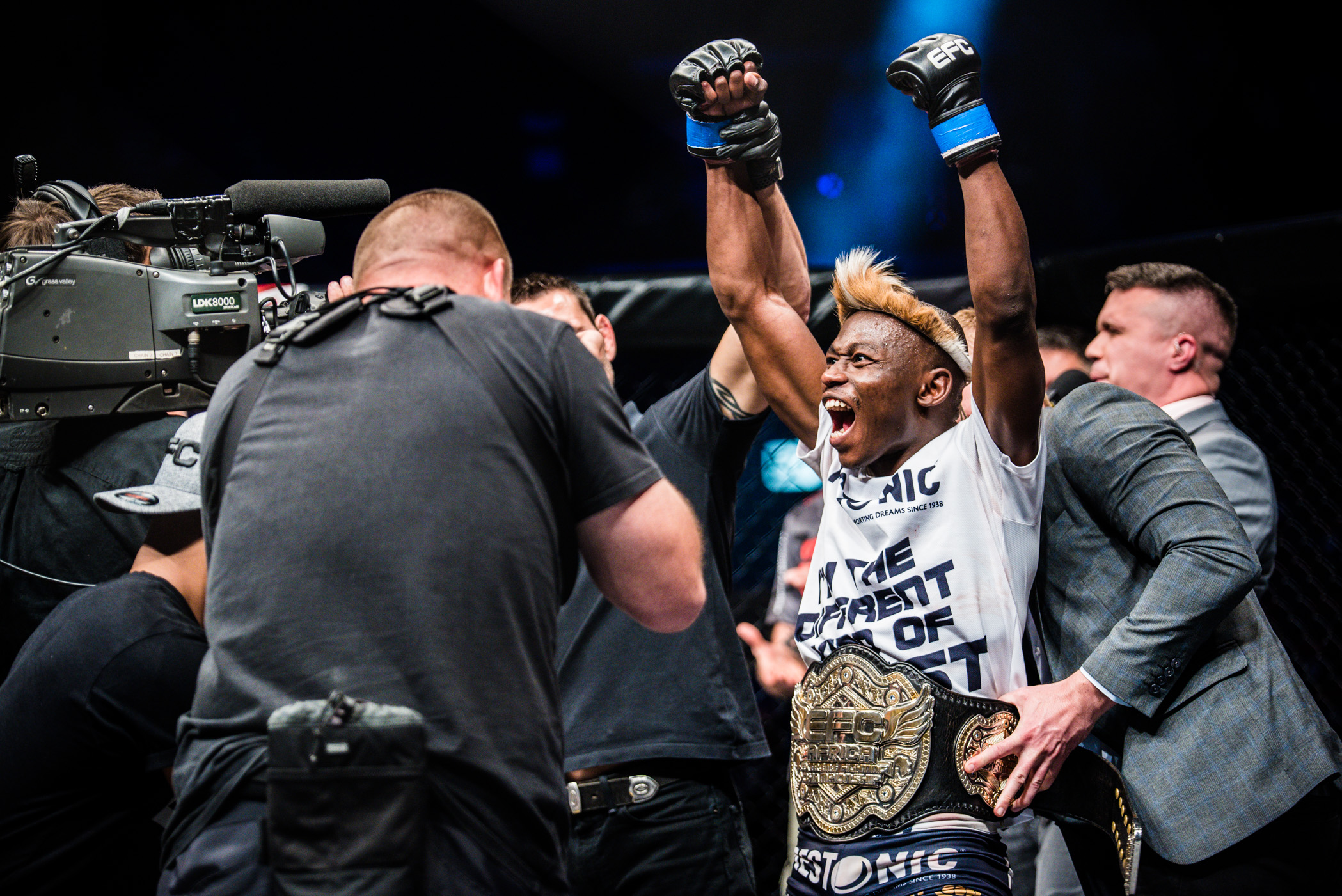 The tension in the arena was palpable as Zulu made his way to the Hexagon. The champion trails a path of destruction, and had promised the same for Cape Town’s Joshua.

Initially Joshua opted to test himself against the famed striker on the feet, but soon landed a takedown in the face of Zulu’s kickboxing skills.

The pattern repeated in the second round, this time Joshua’s Brazilian Jiu Jitsu brown belt coming the fore with good top pressure, and a near triangle choke. But Zulu was elusive, escaping Joshua’s setups at the last moment, and punishing him with strikes.

At the opening of the third Zulu rocked Joshua with multiples strikes to the jaw, forcing a wobbly challenger to take the fight to the ground. He took the champion’s back and had the crowd screaming at a rear naked choke attempt. Again Zulu escaped, and punished Joshua with strikes.

Throughout the fourth and fifth the bout intensified with the damage count mounting on Joshua’s face. Referree Karagiannidis called a doctor in to monitor a gash on Joshua’s forehead. An unforgettable war was unfolding. Joshua had promised Zulu’s head on a pike or his own body on his shield, and his words were proving true.

In the fifth round Zulu clamped a guillotine choke onto Joshua’s exposed neck, forcing the tap and bringing an unforgiving battle to an end. Theirs was fight of the night, and Zulu is undoubtedly one of the organisation’s greatest champions.

Although neither athlete hailed from Cape Town, Port Elizabeth’s Biko clearly enjoyed most of the Capetonian support in his interim bantamweight title clash with the UK’s Cal Ellenor.

Biko brought a commonwealth judo champion pedigree into the fight, and at the three minute mark succeeded with his first takedown. The bout became a close quarters back and forth battle on the fence and on the ground throughout.

The UK’s Joe ‘Silk’ Cummins ended his 18 month absence from the Hexagon with an appearance against Cape Town’s grappling specialist Armand Scheepers.

Cummins opened with smooth strikes but Scheepers was able to tie Cummins up and take the fight to the ground. There Cummins dominated. A crucifix and a barrage of ground and pound from the Briton brought the stoppage in the second round.

“I want Van Staden,” Cummins declared in his interview. “Mazany is out of the picture, let myself and Martin battle for the lightweight belt.”

Norway’s Torbjørn Madsen returned to the EFC Hexagon with the support of his country behind him, as EFC broadcast live on TV in that nation for the first time. The milestone was bittersweet, however, as South Africa’s Mzwandile Hlongwa quickly dropped Madsen with a devastating spinning back fist, knocking him out cold.

Madsen was taken to hospital as a precaution for further medical checks, and has since been discharged.

The sensational Capetonian Faeez Jacobs opened the main card with his bout against Johannesburg‘s TC Khusu. Jacobs was motivated, coming off of a loss against the night’s bantamweight title contender Cal Ellenor, and made that motivation count.

Inside the first round Jacobs reversed Khusu’s takedown and pounded his opponent out. Jacobs is back in the win column, and the Mother City once again has their new hero in his driver’s seat.

“Give me the belt, give me the opportunity, and watch me shine!” shouted Jacobs after his win, as well as repeating his motto to fans and future fans alike – ‘Dream, Believe, Achieve!’”

Fight of the night was awarded to the flyweight title clash between Nkazimulo Zulu and Gary Joshua. Performance bonuses went to Nico Yamdjie and Thabani Mndebele for their heavyweight clash, and Saxon Delafield, Kulekani Hlongwa and Mzwandile Hlongwa for their KO performances.

The official EFC 75 results are as follows:

Serge Kasanda defeated Chad Hepburn via technical decision (medical stoppage) at the end of round 2.

Shane Higgins defeated Benjamin Mangala via TKO (strikes) 2:40 into round 1.

Khulekani Hlongwa defeated Willem Smith via knockout 0:44 into round 1.

Chris Dove defeated Corné Blom via TKO (strikes) 2:47 into round 1.

Saxon Delafield defeated Regis Muyambo via TKO 1:13 into round 1.

Mzwandile Hlongwa defeated Torbjørn Madsen via KO 1:11 into round 1.

Joe Cummins defeated Armand Scheepers via TKO (strikes) 3:07 into round 2.