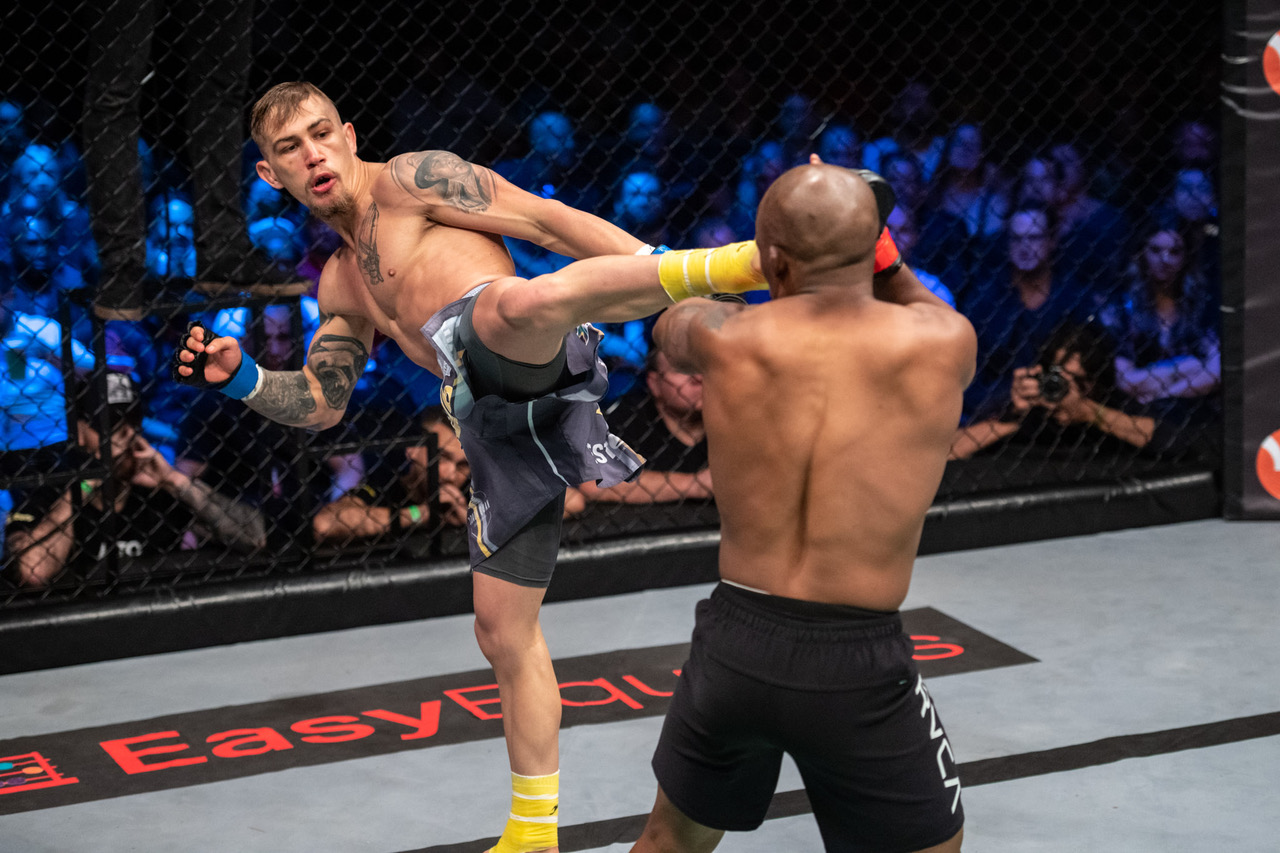 Cape Town, South Africa – Two title bouts were fought at EFC 78 at GrandWest tonight, with one belt changing hands. JP Buys (7-2) unified his bantamweight title with a dominating performance against Luthando Biko (5-2). In the co-main event, the UK’s Jake Hadley (4-0) proved himself to the world with an unforgettable performance, in an unforgettable fight against South Africa’s Nkazimulo Zulu (11-3), ending his flyweight reign.

The bout between Buys and Biko shattered expectations from the start. Biko, the renowned pressure and top control wrestler, revealed crisp stand up that had Buys’ head snapping back throughout the round. However the champion was unhurt, and ended the round with a crisp takedown and cruel hammer fists to the side of Biko’s head.

The second, ushered in a battle of the wrestlers, and a completely different fight. Buys utterly dominated Biko with expert transitions and control. For two rounds he battered his opponent, until a broken Biko finally subsided to ground and pound in the fourth round.

Buys made an emphatic statement with his performance. The bantamweight division has a truly fearsome, undisputed champion.

Zulu vs Hadley for the flyweight title kicked off with nail-biting tension. Zulu dropped the Brit within the first ten seconds, but then suffered a takedown and back-take, and had to defend a rear naked choke for an agonising four minutes.

The second saw Hadley reveal the full scope of his ground arsenal. Again he took the champion’s back for near-on two minutes, lost top control but immediately threatened with a slick gogoplata and then arm bar attempt. However, at the end of the second, his dominance had met iron defense, and crunching strikes from the champion.

In the third Zulu found a flow against the immense skills of Hadley, reversing Hadley’s relentless submission attempts, and scoring with ground and pound. At the end of the round, it may have been two rounds to one to the challenger.

Hadley took control again in the fourth, however, giving Zulu the necessity of finishing the fight or losing his title in the final round.

Fittingly, the last round seemed evenly contested; a blizzard of near finishes from both men on the feet and on the deck. By the end the relationship between them was clear; worthy adversaries, life-long brothers. Zulu the clear striking king, but Hadley an incredible talent on the ground.

The crowd grew silent as the judges deliberated, sensing the loss of the legendary Zulu. The decision awarded the bout to the sensational 22 year old Hadley, ending the reign of one of the organisation’s most beloved champions, and ushering in the era and the career, of a world-beating new talent.

Born in the Mother City, and now having returned to become a resident, Saxon Delafield entered the Hexagon looking to build on his highlight reel KO of Regis Muyambo at his last outing.

He faced Johannesburg’s Rodrique Kena, and stunned the Cape Town audience with a savage attack of accurate hooks that had Kena reeling on the feet, and eating knees before Delafield latched onto a guillotine and choked his opponent out.

Delafield now has two highlight reel finishes on the trot, and is clearly riding a massive run of form.

De Lange vs Teniers was an all Cape Town affair, and the return of two admired athletes after a long absence.

Teniers sprang into the bout with his trademark bullish style, wading towards De Lange with swinging blows. De Lange did well to maintain his range and land strikes from the outside, as well as punish Teniers with knees when the range was close.

A riveting back and forth battle seemed set to go into the second round, when De Lange scored a trip and quickly took mount before pounding Teniers out.

With the coming welterweight grand prix in jeopardy after Conrad Seabi’s unfortunate concussion, Teniers was vocal about staking his own claim for a shot at the belt.

Theirs was a rematch two years in the making. At EFC 60 the two fought an all-out war over three rounds, and tonight’s bout promised the same. Both traded leather in the first round, but it was in the second that Manengela’s ground pedigree came to the fore, bringing him the takedown, ground control, and an eventual arm triangle choke to take the win.

The official EFC 78 results are as follows:

Adrian Sanchez defeated Christian Bobo via TKO (spunches) 0:40 into round 2.

Zaakir Badat defeated Willem Smith via TKO (punches) 2:01 into round 1.

Mutuale Basambambo defeated HP van Staden via KO 0:46 into round 1.

Wade Kerspuy defeated Josemar Octavio via submission (armbar) 2:36 into round 1.

Imke Kuikstra defeated Paulwetu Namba via submission (triangle) 3:47 into round 2.

Shaun de Lange defeated Marcel Teniers via tapout (due to strikes) 4:40 into round 1.

Saxon Delafield defeated Rodrique Kena via submission (guillotine) 0:35 into the round 1.

The advertised bout between Luke Michael and Conrad Seabi did not take place due to injury.