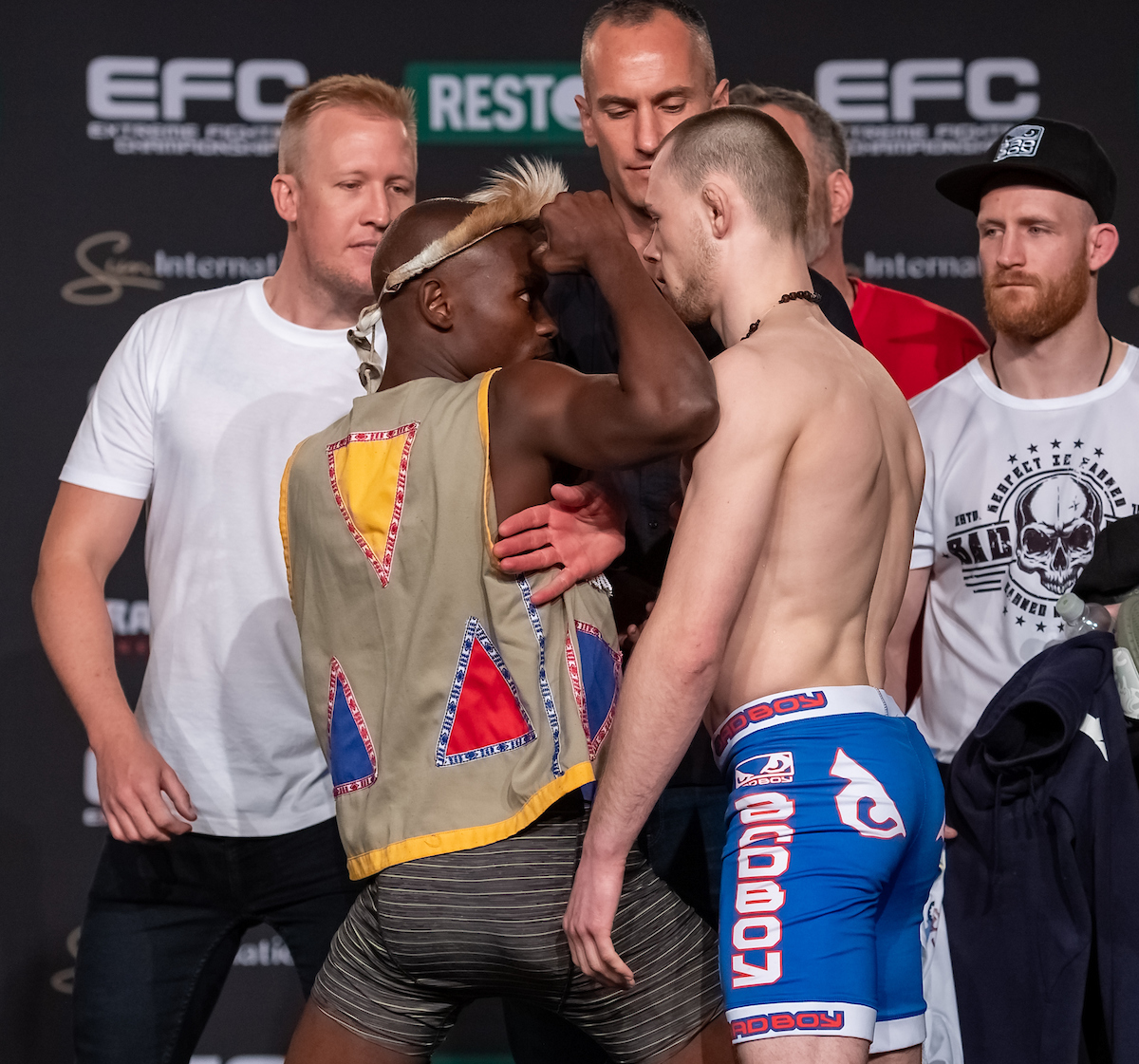 Buys and Biko have been respectful colleagues within the EFC ranks for years, despite a bout between being inevitable. Both athletes have been frank in their estimation of their opponent, but avoided trash talk in favour of steel intent. Theirs is a job to be done, and it will be completed tomorrow night with only one man still calling the bantamweight title his own.

“This is my job, this is my lifestyle,” commented Buys. “Without fighting I don’t have anything else. We are going to punch each other hard, we are going to leave it all out there. My mentality is kill or be killed. I’m going in there to look to finish the fight.”

Biko was as open in his regard for Buys, and his desire to win. The town of Port Elizabeth’s first EFC champion, his interim belt holds double significance, which he aims to unify.

“When I brought the belt back home it was a special moment [after his victory over Ellenor at EFC 75],” said Biko. “It brought me to tears. I am really excited to do it again. I expect to win the fight in any way, when the opportunity presents itself.”

While the main event is infused with grim resolve, the co-main bout between EFC flyweight champion Nkazimulo Zulu and the UK’s undefeated Jake Hadley is boiling with bile.

Zulu, notorious for sending two opponents straight to surgery, has a way of ramping the tension in any bout, such is the threat he brings. Hadley has been especially outspoken. At only 22 years old, he is supremely confident that he will unseat the man undefeated in the last five years.

“Zulu has been a champion for a long time,” he remarked to EFC commentator Cyrus Fees. “It’s my time. I’m a true mixed martial artist. I can knock him out and sub him out. We’ll see Saturday.”

“I don’t care who he is or where he comes from, it’s another piece of meat for me on the table,” replied a deadpan Zulu. “He’s going to be sleeping, and I’ll be raising my hand.”

As earlier this week where Zulu and Hadley threatened fire on the set of the Espresso Morning Show, the two had to be kept apart when facing off.

Michael has had trouble with opponents not making weight before, and today he faced the same situation. Seabi missed weight and could not appear at the televised weigh in. Where Michael has declined to fight an overweight opponent previously, today he insisted the bout continue. Seabi will take a financial penalty allowing him to compete.

The slick boxing of the DRC’s Rodrique Kena meets the highlight reel KO power of Cape Town’s new resident hero, Saxon Delafield. The last time ‘Saxbomb’ appeared in the Mother City he dealt Regis Muyambo a walk off knock out [EFC 75], and threatened the same to Kena in an intense stare down.

Further down the card, crowd favourite Sizwe Mnikathi stepped in on the shortest notice, when August Kayambala could not appear for his bout with Port Elizabeth’s Sindile Manengela.

Mnikathi is a veteran of numerous celebrated wars, and a welcome replacement for what is now a rematch with an old foe, and a stand out to look forward to tomorrow night.

Christian Bobo and Conrad Seabi failed to make weight… Both athletes will suffer a financial penalty.

The official EFC 78 weigh-in results are as follows: