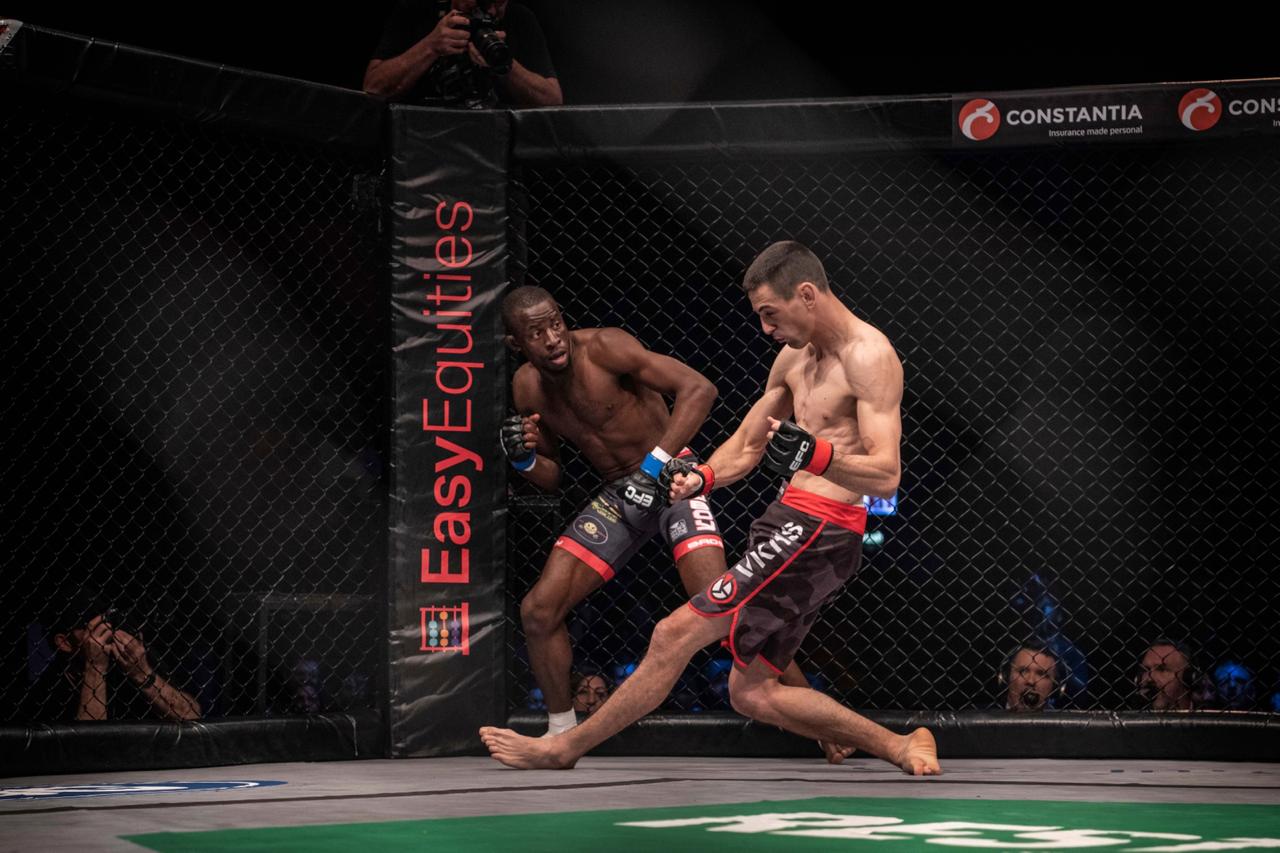 Croatia’s Kaput entered the bout with an impressive undefeated 8-0 record, and a sensational five second knock out at his last outing. The featherweight champion Kabesa, with only one defeat in his career, was confident throughout the build up to the bout, and backed his word inside the fight.

Kaput began by pressuring the champion with punches. Kabesa circled, and at just over the one minute mark, connected with a calculated overhand right that crumpled Kaput to the canvas.

Kabesa’s victory was brutal and decisive. He now cements himself as one of the greatest champions in EFC history.

The first round of the Grand Prix to determine the organisation’s new welterweight champion kicked off with Zimbabwe’s Themba Gorimbo returning after almost two year’s absense, to face Brazil’s Jose Da Rocha.

The first round featured a blizzard of leather with both men throwing punches. Da Rocha landed the more telling blows, but Gorimbo made use of his own speciality by tying the Brazilian up in the clinch and controlling the fight there. However, Da Rocha had Gorimbo in deep trouble in the last ten seconds, head-hunting a wobbling Gorimbo who was saved by the bell.

No doubt aware of potentially having lost the first round, Gorimbo immediately took the Brazilian down in the second and controlled the fight on the ground, landing regular strikes to almost certainly make it a round a-piece going into the third.

Gorimbo stuck to his winning formula, controlling the fight on the ground to take a decisive decision victory, and the chance to move on to the final to determine the new EFC welterweight champion.

“This is a one man show,” said Gorimbo post fight, describing the chance that either Conrad Seabi or Luke Michael will have of beating him for the title. “They would like to fight for the title, I will be winning it.”

Coxen was trailing a three fight losing streak, and seemed to have the losses behind him with a run of hard strikes and good head movement that kept the Congolese athlete at bay, but Kanyeba’s crisp boxing won out; first dropping Coxen with a punch to the head, and then following moments later with a body shot that ended the bout.

South African Stefan Pretorius entered the Hexagon against the man with a 100% finish rate, in Durban’s Khulekani Hlongwa.

Pretorius scored a takedown from the fence within the first minute, took full mount, and then pounded his opponent’s head into the canvas with elbows, forcing referee Swart to stop the bout.

Pretorius has newly entered the middleweight division, and announced himself as an exciting new prospect there.

Ekson quickly revealed powerful and accurate striking, tagging Madiba, who fired his own punch combinations in return, setting up a thrilling back and forth first round on the feet.

The second round saw Madiba spring into control with a flurry of straight rights and a takedown, which immediately back-fired as he fell into the Brazilian’s closed guard, and a waiting guillotine choke that ended the fight.

The official EFC 79 results are as follows:

Tommy Strydom defeated Given Majuba via TKO (Punches) 3:35 into round 1.

Faeez Jacobs defeated Billy Oosthuizen by KO (Knees) 4:09 into round 1.

Stefan Pretorius defeated Khulekani Hlongwa via TKO (Punches) 3:01 into round 1.

Anicet Kanyeba defeated Pietie Coxen via TKO (Punches) 3:14 into round 1.