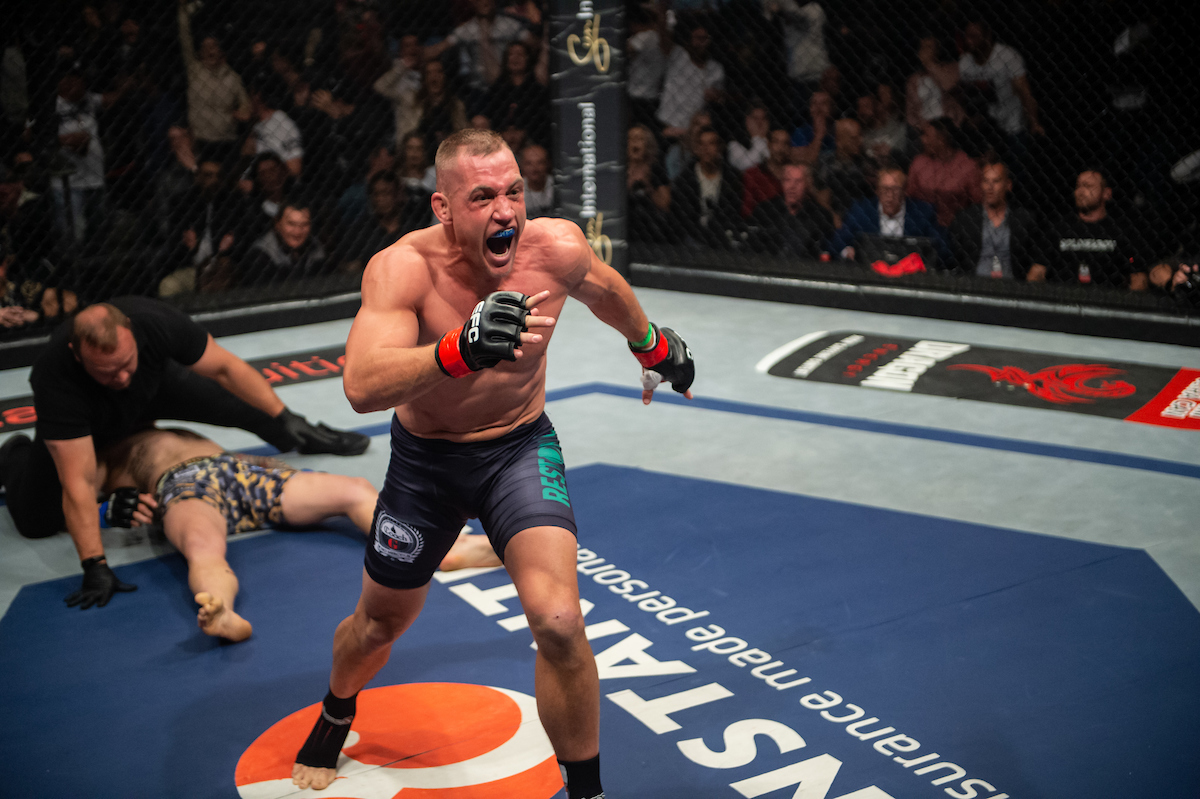 It was near on five years ago that McLellan vacated the EFC middleweight title to pursue a career in the UFC, and tonight he made his return to an arena chanting his name.

The lesser known Lesar made a quieter entrance, and seemed the more stiff of the two as the bout got underway. McLellan began to unleash fluid striking, picking his shots on an unorthodox Lesar, and seemed to be setting up a dominant performance.

At 2:56 into the round, however, the TF1 champion turned the world upside down. An overhand left smashed straight into McLellan’s jaw, knocking him out cold.

The arena stood in stunned silence, but for a screaming Lesar. The man who stormed to the front from last pick position on the TF1 television show, beating all comers with his unrelenting heart and unorthodox style, had felled the king.

Lesar now owns the EFC interim middleweight title, and immediately faced off with incumbent and on hand champion Dricus Du Plessis. When asked if Du Plessis thought Lesar could beat him, Du Plessis replied ‘not a chance.’

Lesar laughed in response. From the man who has demolished every obstacle: a clean sweep through the TF1 competition, a single loss as TF2 coach, and now the victor against McLellan, it is a laugh that rings with menace. Lesar is near unstoppable.

The Fighter Season 2 finalé between Netherland’s Mellony Geugjes and France’s Manon Fiorot played out to a savage conclusion.

Striking sensation, Fiorot, immediately set about peppering Geugjes with long range missiles, landing with a full arsenal of Karate based firepower against a Geugjes who kept steaming forward and landing strikes of her own, but ultimately could not match Fiorot’s output in the first.

In the second round Fiorot revealed a new aspect to her game, scoring an early takedown and from there grinding Geugjes with strikes from her opponent’s full guard.

In the third round Fiorot revealed the full range of her savage talent, smashing Geugjes with increasingly creative and brutal strikes, as well as once again scoring a takedown against the fence, and pounding Geugjes out to earn the stoppage.

Fiorot has now booked a shot against EFC women’s flyweight and bantamweight champoin, Amanda Lino, for her flyweight belt.

Lino made an appearance in the Hexagon, warning her challenger that the belt would be staying in South Africa. Fiorot’s response was direct; a headbutt during their faceoff.

Lino vs Fiorot for the EFC women’s flyweight title is now one of the most anticipated bouts of the year, a battle between athletes that stand at the very top of the organisation in skill and intensity.

Johannesburg’s Marcel Els and Cape Town’s Saxon Delafield entered the hexagon to the news that the winner would be looking at a potential title shot against EFC lightweight champion, the UK’s Joe Cummins.

It was a clash of two devasting finishers, and lived up to expectation. Delafield exploded out of the blocks and clinched up with Els, delivering brutal knees and uppercuts. Els weathered the onslaught and scored a takedown – to his detriment as Delafield immediately latched onto an arm and finished the fight via armbar submission.

It was an extraordinary performance from Delafield, sending a message rumbling to the champion across the seas. Delafield has blown passed three men in succession, all in the first round, all with precise brutality. Delafield is a re-invented monster, calling for his title shot.

Cronje showed absolute precision throughout the two round battle. In the first he remained strategic, keeping his distance while both scored with intermittent strikes, before landing a textbook double leg takedown at 20 seconds to go, sealing his dominance on the first.

In the second round Cronje opened up, applying pressure and taking the bout to the ground, where he dominated with superb control and ground and pound, forcing the stoppage from referree Wikus Swart.

Chipfumbu controlled the bout from the start, pressuring Dwama to the fence and dominating the clinch game for two rounds, punctuated by short bursts of strikes from both men, and periodic sessions of hard ground and pound from Chipfumbu.

Dwama survived the superior display of skill and in the third was gamely absorbing more punishment, when Chipfumbu made a startling error, landing a head kick to his grounded opponent, and handing himself a DQ loss.

A performance bonus was awarded to Saxon Delafield, and fight of the night went to the encounter between Manon Fiorot and Mellony Geugjes.

The official EFC 80 results are as follows:

The fight between Warren Richards and Benjamin Mangala was cancelled.

Djikasa defeated Ivan Strydom via TKO (punches) 1:47 into round 1.

Devon Cronje defeated Guy Mongambi via TKO (punches) 3:34 into round 2.

Saxon Delafield defeated Marcel Els via submission (armbar) 0:47 into round 1.

The fight between Luke Michael and Conrad Seabi was cancelled due to medical reasons.

Manon Fiorot defeated Mellony Geugjes via TKO (punches) 4:17 into round 3 to win the The Fighter Season 2 tournament.

Brendan Lesar defeated Garreth McLellan via KO (Punch) 2:56 into round 1.

All eyes now turn to EFC 81, which takes place on Saturday 10 August live from Time Square, Menlyn Maine, Pretoria. Tickets will be on sale soon at www.computicket.com. Full broadcast details available on efcworldwide.com.