“I CAN FEEL THE MOMENT ALREADY” 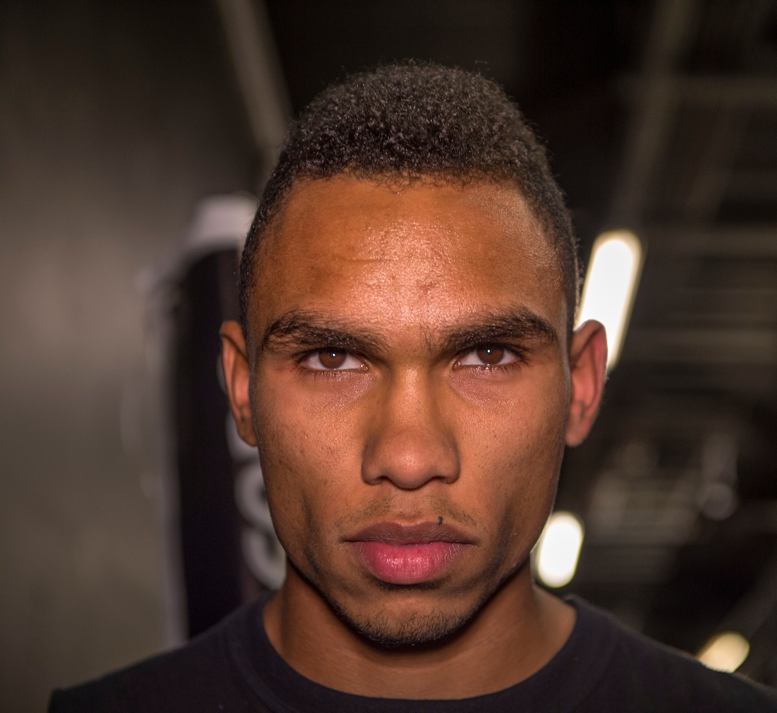 Johannesburg, South Africa – He has made one of the quickest rises to fame in EFC with flashy knockouts, positive messages and his unique charismatic ways. In just two years, Faeez ‘Troublemaker’ Jacobs has risen from EFC debutant to standout prospect, and is now on the precipice of the biggest fight of his career. On Saturday 10 August, he will face the formidable Nkazimulo Zulu for the interim EFC 135lbs title in the main event at EFC 81. Live from Time Square, Pretoria.

Jacobs’ rise to the top started just over two years ago with a debut TKO victory over Jessie Flemming. Jacobs entered the Hexagon in the opening fight of the night as the underdog, and left the as the victor, far exceeding the expectations of all but his own. This was an evening of Cape Town fight-power as two more fellow Capetonian champions, Don Madge & Irshaad Sayed topped the fight card. Two local legends who’s footsteps he is looking to follow.

In a recent interview, Jacobs talks about some of the major moments that lead to the title fight;

“The debut went so fast. Everything was just from one breath to the next. Before I knew it, it was over.” Jacobs reminisces. “I was warming up, next thing I am in the cage and then it was done. I didn’t feel like I got to be in the moment that long. I came from other promotions and I had been winning for a long time.” He added, “I didn’t know how significant that moment was. But it was incredible to experience it. It just happened so fast.”

Hailing from Rocklands, Mitchells Plain, Cape Town, an area notorious for drugs and gangsterism in South Africa, Jacobs was born to fight. And thanks to bullies who made his life miserable at school, he turned to sport to fend for himself. He overcame. A theme seen throughout his career and his personal motto: “Dream, Believe, Achieve. 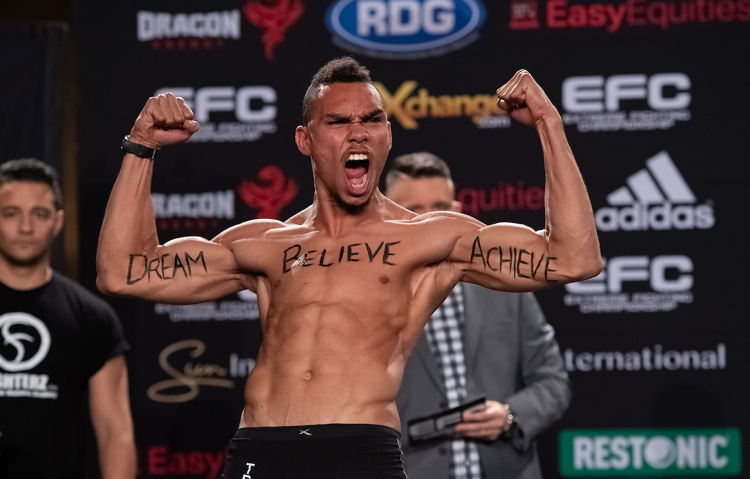 Prior to turning pro, Jacobs was an amateur kickboxer and drove for ride hailing service Uber. This was in fact how he was first ‘discovered’. A South African MMA journalist was riding home from EFC, discussing the fights; when Jacobs interjected and proceeded to breakdown the fights they had just watched. Waxing lyrical with his knowledge, Faeez then knew that he would be a champion one day.

Flash forward just several months from his debut to Sun City, Jacobs returned. With a last minute cancellation, his fight against Muay Thai champ Kevin Pheko got bumped up to the main card. Jacobs did not disappoint, finishing it in the first with his devastating striking.

“That was my first time on TV and the first time my family actually started taking my goals seriously,” explains Jacobs. “:There was a lot of people wanting me to quit and go study and do the normal route. I had been telling them f**** it for years.” Jacobs continued,  “Then the Pheko thing happened and they saw the fight on TV, it became a significant moment in my family that brought everyone around and gave me unconditional support. They could finally see my vision.”

He began to put his and his small gym’s name on the MMA map. The gym is run by his friend and mentor Fidaah Edries and they have slowly been raising eyebrows in the organisation with their spectacular results. Including teammate Fafa Dwama, who is now on a 4 fight win streak following EFC 80.

A few months later on the hunt to get his third straight finish, he went toe-to-toe with Angola’s Nerik Simoes. A fight that earned them Fight of the Night. He bounced back quick with a 4th fight in one year, an impressive fight schedule. Especially in your freshman year.

He won that fight against the championship kickboxer, Oumpie Sebeko, with a flying kick TKO. A finish that lives on, etched in fans’ memories: https://youtu.be/Z_aE-feh6NM

A phenomenal first year in the organisation, one he was acknowledged for with for nominations in ‘Freshman of the Year’ and ‘Most Exciting Athlete of the Year’ categories.

“Fighting 4 times in a year, is only half the amount of times I want to fight. If I could fight 8 fights a year, if I could fight every month, man put me in there every weekend,” Jacobs elaborates. “If there is no injuries, I will gladly jump in there. I love fighting, I wanna compete.” He adds, “Rising through the ranks, I’m like ‘Damn, I’m not gonna get as many fights as I want. You have to wait for worthy opponents.’ I hope that I get to be a very active champion.”

Jump a year later, Jacobs has had another 3 fights, winning the last two with first round finishes against established names, Tumisang Madiba and TC Khusu.

Nominated again for the EFC awards, that year, he claimed the ‘Most Exciting Athlete of the Year’ category in March.

He followed up with his most recent victory on 24 hours’ notice when Oosthuizen’s opponent had withdrawn.

“I took this fight on 24 hours’ notice. If I did this with 24 hours, what I can do with a full camp. Give me that belt, give me that shot, everyone knows I deserve it,” Jacobs roared at the crowd.

He now faces his biggest challenge yet, in a potential life changing fight; against a man that has hospitalised several of his opponents. Zulu has long been considered one of the most dangerous strikers in the world, with his lightning speed and power.

For Jacobs to claim gold, it will be a true ‘Cinderella Story’. A rapid climb up the ranks to stardom, similarly in the footsteps of the champs Madge and Sayed whose card he opened up in his debut.  And judging by his attitude, nothing will stop him from achieving:

“Winning the title now, will mean a lot to me. Keeping that promise I made to myself when I was a sixteen year old boy,” Jacobs began. “It means a lot to prove to myself that I can set a goal and through all the s**t that happened, regardless of the ups and downs, I could make it happen. I went through hell, through pain, I got through and I stayed true to myself with conviction and certainty. I fought till the end and I feel as if I deserve to be champion.”

“I can feel that moment already,” Jacobs gets quitter and more serious. You can feel his intensity as he ‘remembers the future’. “I can feel that intense rush of emotions. I assume when I am celebrating, it will feel similar to when I fought Sebeko. I feel like all the odds were stacked against me then and when that victory came, it was probably one of  the biggest moments in my career. And it feels the same again now.” He continued, “There is a lot of adversity to still get through and it will make it all that much sweeter and give me a sense of pride. It will be in alignment with my purpose. And I have no idea what is going to run through my body when I hold that belt up.”

True to his confident nature, he ended with a warning for ‘Zuluboy’ and his fans, “I have left many unconscious bodies scattered all over the cage. 10 August I will leave a body lying in the centre of the Hex as I claim my throne.” 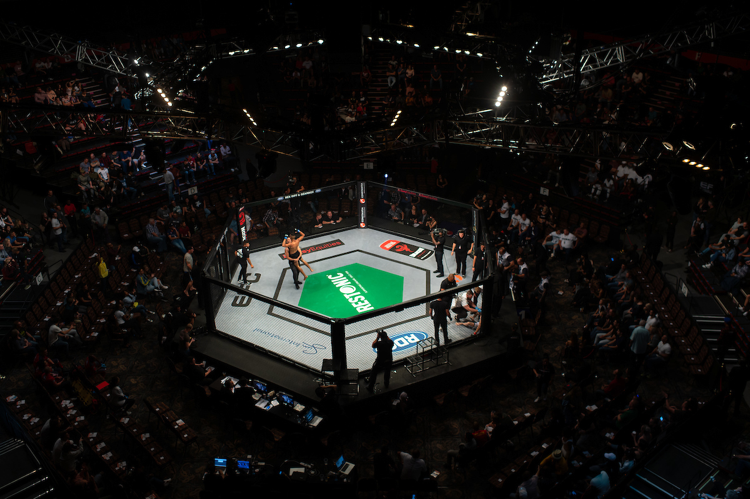 Does Jacobs realise his dreams and ambitions and beat the odds yet again, or will Zulu end the hype surrounding Jacobs?

This fight takes place as the headlining main event at the top of an exciting 12-bout fight card.