2 CHAMPIONSHIP LEGACIES IN THE MAKING 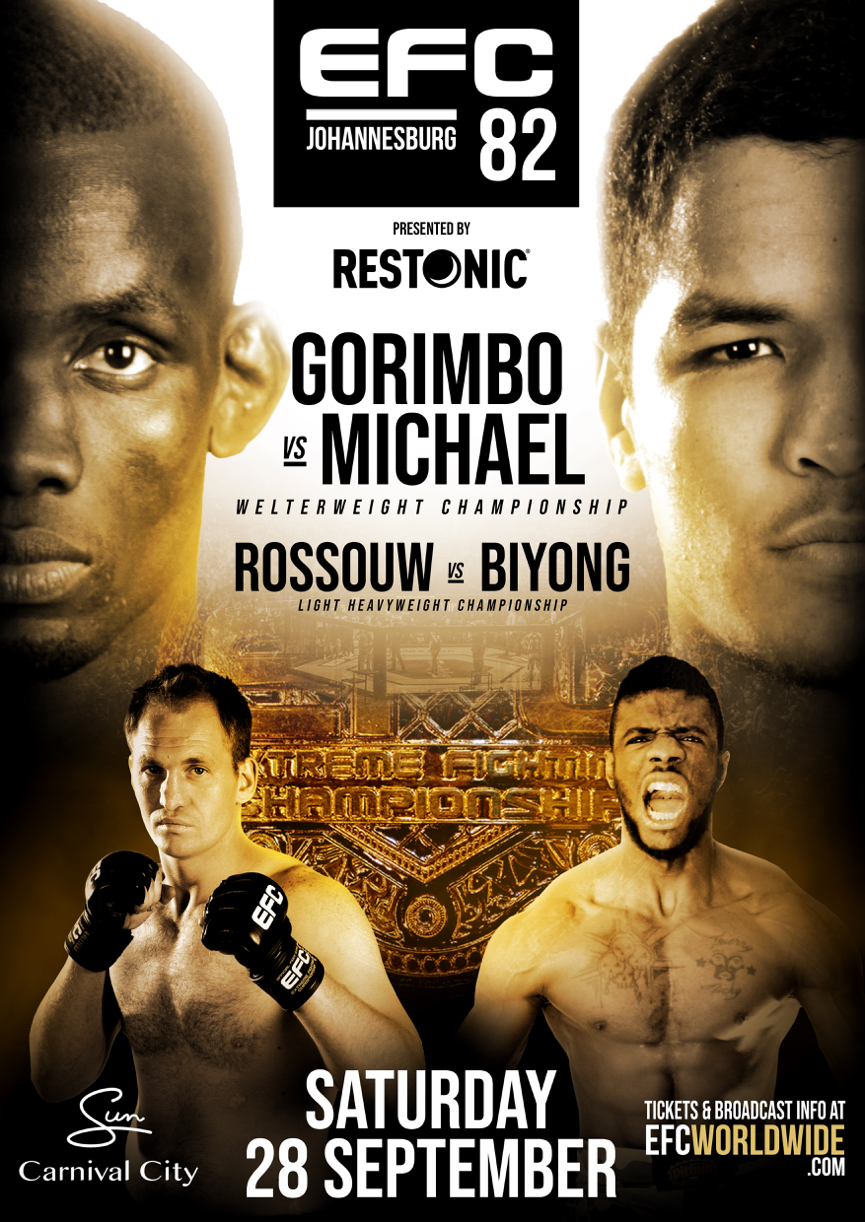 Johannesburg, South Africa – EFC returns to the home of African MMA, Carnival City, JHB on 28 September which will be an action packed night as two new champions will be crowned.

The first match up was between Gorimbo and Da Rocha and Michael was scheduled to face Seabi to determine the second spot in the final round.

Over three grueling hard-fought rounds, Gorimbo emerged the victor in the first fight of the tournament at EFC 79 to secure his spot in the finals.

Michael’s path to the finals has been less than smooth sailing for the young South African. Originally set to face Seabi at EFC 76, Michael withdrew a month out with a knee injury. This bout was then rescheduled for EFC 78 in Cape Town where Seabi was not allowed to compete due to hitting his head in the sauna during his weight cut.

Although Seabi missed weight, the fight was to go on regardless, but in a turn of events the fight was yet again called off. Michael’s brain scans came back and the EFC medical team did not clear him to fight due to an anomaly found.

“Seabi needs to prove he can make welterweight before we can give him a title fight. We will be offering a new opponent soon,” explained Cartmell.

Hailing from Cameroon, Simon Biyong lives and trains in Bel Paese, Italy. He moved to the European city to study at the Academy of Fine Arts of Genoa.

“When I arrived in Italy, it wasn’t easy at all…,” Biyong began in a recent interview. “I studied, I worked to self-finance my art, but also to weigh as little as possible on my family. I hardly knew anyone. So I thought of joining the gym to socialize a little. I participated in a trial lesson at MMA. An incredible discovery for me, but unfortunately in those days I didn’t have enough money to register. I worked hard, started selling my paintings and, one year later, I met Mauro Salis, my current coach.” Ahead of making his EFC debut, ‘Hemlé’ or ‘Lion Heart’ in English is now a 5-1 professional Mixed Martial Artist. 4 of his wins coming by way of KO.

He faces a formidable task in his EFC debut, not only is he fighting for the title, he faces ‘The Lion Slayer’. A man with a 100% finish rate that competes across the two biggest divisions in the organisation.

Biyong has a simple message for fans, “”EFC, your new champion is coming!”

Added to these epic title fights, sees the rise of the No.1 welterweight contender when KO artist, Pupanga Tresor, goes head-to-head with the notorious Mamelodi warrior, Conrad Seabi. Two aggressive strikers that will stop at nothing for another highlight reel finish in their quest for EFC gold.

Plus, former champ Luthando Biko returns to action to face the highly active Tumisang Madiba. Biko wants his belt back and Madiba wants revenge on the champ. They will have to go through each other to earn their spot at the top, with their eyes firmly set on the champ Faeez Jacobs. This sets up a barnburner of a matchup with a potential contendership hanging in the balance.

And kicking off the main card with expected fireworks are two veterans of the game. Former champ, Dino Bagattin will collide with Pietie Coxen. With 36 fights between the two of them, spectacular finishes and fight of the night performances are their legacies; which they will cement in the memory of fans yet again at Carnival City.

EFC 82 Gorimbo vs Michael, Rossouw vs Biyong, presented by Restonic, which is taking place on Saturday 28 September, live from Carnival City, Johannesburg. Tickets are on sale at computicket.com. Full broadcast details available on efcworldwide.com.