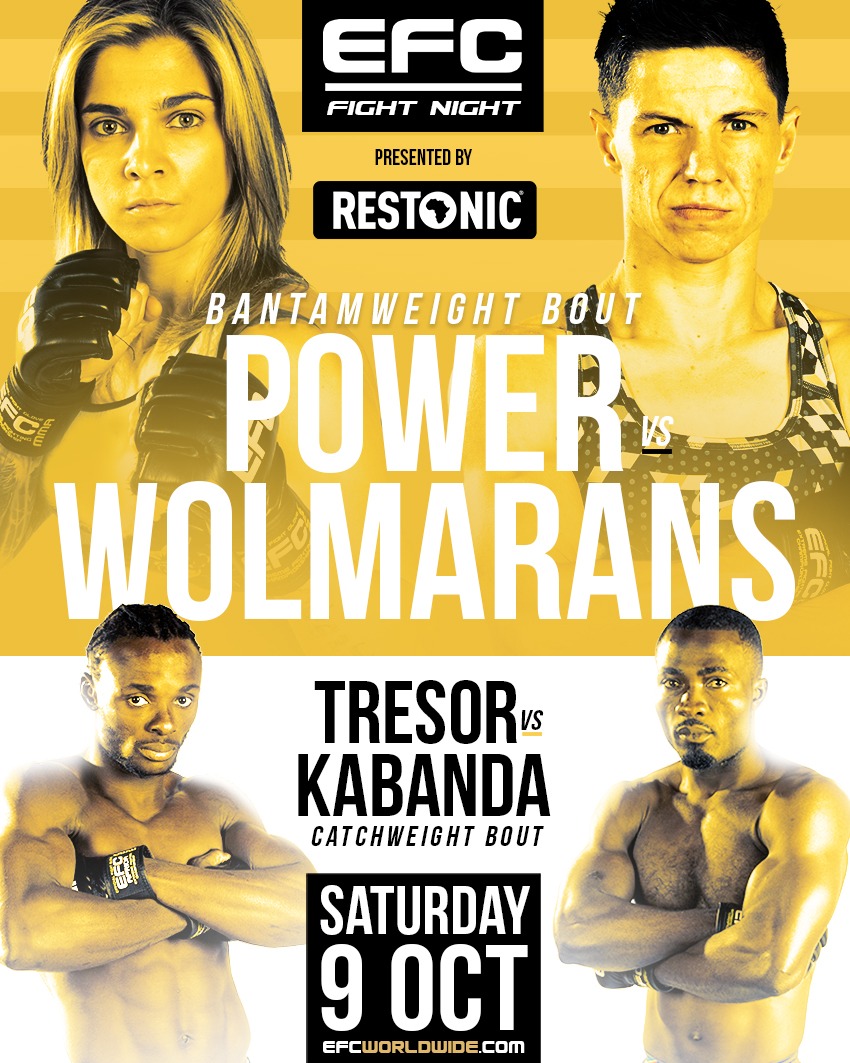 For over 10 years EFC athletes have displayed their skill, power and determination on the continents greatest combat stage, all with global domination and championship aspirations in mind, and now, ahead of the organizations milestone 90th event, the first EFC fight night featuring a host of future contenders is set to take place.

Headlining EFC Fight Night 1, the future contender to the women’s bantamweight division will be decided as Shana ‘Titanium’ Power returns to the Hexagon to face Christine ‘The Edge’ Wolmarans.

After a hiatus from competition the highly touted Power has been sharpening her skills abroad and has been preparing for a dramatic comeback. She clashes with one of the most formidably trained competitors to step onto the mats and one who takes strength and accuracy to another level.

On Saturday 9 October live from the EFC performance Institute in Johannesburg, South Africa, behind closed doors but broadcast to millions around the world, we see whether Christine’s sharp striking will be enough to break through Shana’s ‘Titanium’ defense, or if Power will push her ambitions of championship contender status over ‘The Edge’.

Don’t miss Shana ‘Titanium’ Power versus Christine ‘The Edge” Wolmarens in the main event of the evening at EFC Fight Night 1.

The co-main event features two of the DRC’s biggest prospects with potential for world success find themselves back in the spotlight after years of waiting in the shadows, but as Pupanga ‘Fireboy’ Tresor goes head-to-head with fellow countryman Kaleka ‘Block’ Kabanda only one can emerge victorious.

Hunting his fourth win in the hexagon, Tresor is a man on a mission. Since facing former champion Jose Da Rocha, he is determined to do whatever it takes to get back to the top contender spot in the division.

With four wins behind him and a past decision loss to Tresor, which stopped his climb to the top on the spot, Kabanda eagerly took this short notice fight against his past rival.

But will the continued desire for championship validation by Tresor lead him to victory or will the ambitions of redemption for Kabanda be what is needed to change history? One thing for certain, Pupanga Tresor versus Kaleka Kabanda is going to set the block on fire!

The welterweight division is put on notice as the meeting between Jailson Da Sousa, the new Brazilian threat, and Ziko ‘Gorilla’ Makengele the DRC’s latest to remain undefeated is set, and after a clinical debut victory, Alberton’s Julio Plaatjies is back, but this time he finds himself staring in the eyes of a far more experienced opponent, the eyes of none other than Cape Town’s Wade Kerspuy. These plus the clash between Rocky ‘Commanda Man’ Ilunga and Adrian Sanchez seals off the EFC Fight Night 1 main card.

Four exciting prelim bouts featuring a range of new talent and familiar faces will set the tone for the rest of the event.

Frustrated with time out from the Hexagon and missing an opportunity at the last minute to fight former contender Ricky Misholas, Juan Bezuidenhout, who’s coming off a highlight real finish in his last outing is ready for his next big challenge. He clashes with Vandam Mbuyi, the heavyweight absolute making his long awaited return. After back-to-back appearances against four former champions and then facing a tough ban from competition, Mbuyi has made it clear that he still believes he belongs at the top. As two of the organisations heaviest hitters collide, we see if the Assassin will continue his winning ways or if Vandam will clinch his fourth victory, after a four-year ban, forty EFC events since he last took to the stand.

Stamping down his authority with two solid first round finishes in his opening appearances, South Africa’s Shannon van Tonder, training out of Johannesburg has fast become a fighter to keep an eye on in the organisation, but entering the EFC and making his career debut at the same time, the judo specialist, Congo’s Emmanuel Sita, who trains out of Cape Town, is looking to put a stop to the all-rounders undefeated rise.

The stage is set for an all out striking spectacle as South Africa’s man of military and the ‘Diamond of Simonstown’, Chris Dove finds himself in the firing line of DRC’s highly experienced Rodrique Kena. Dove, the Muay Thai specialist is marching on to a three fight win streak but with goals as great as his own, Kena is looking to pull the trigger on his fifth win.

And opening the first EFC fight night event in history, a classic wrestler versus boxer matchup takes place as two hard fought warriors, HP van Staden and Robert Swanepoel, who have yet to turn down any challenge put toward them, cross paths. With a second win here on the cards for van Staden, placing him in a strong position to launch a solid career, the outcome is crucial, but the need for Swanepeol to have his hand raised for the first time in five fights is just what is needed for him to reach his future heights.