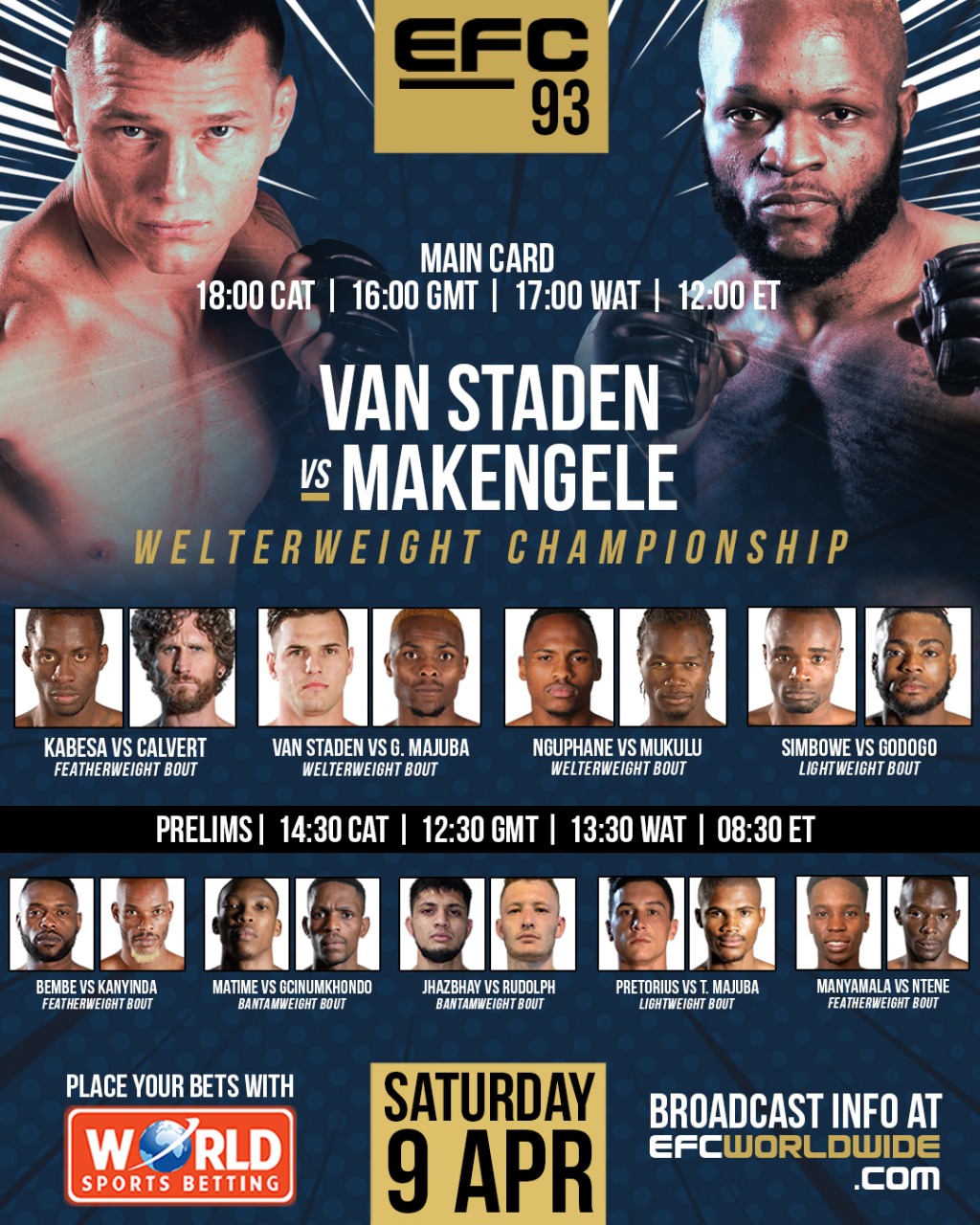 Johannesburg, South Africa –  At EFC 92, the middleweight division crowned Luke Michael as its new champion and now, at EFC 93, the welterweight division looks to for someone to ascend its throne.

The main event of the evening is a scintillating title fight between Martin van Staden from South Africa and Ziko Makengele from the DRC. Van Staden enters the Hexagon with a pro career spanning well over a decade, giving him a 21-11 record. Makengele on the other hand, only had his debut in May of 2021 but has had a dominant run climbing up the rankings, eventually raking up a solid 3-0 record by mauling every single opponent with his devastating ground n’ pound. This promises to be an exciting title clash between one of the most successful and skillful veterans of the EFC against the most naturally-devastating athlete in recent divisional history.

The co-main event of the evening sees Igeu Kabesa, who is considered by many to be the best wrestler on the continent, look to make his return a memorable one against the ever-inspiring Ashley Calvert. After a rare loss against the Brazilian Reinaldo Ekson, Kabesa will seek to rebound in the only way he knows how, with an emphatic first-round victory to re-establish his number one contender place. Calvert however, is on a serious rebound of his own by continuing his recent golden streak following six years in the MMA wilderness, a dangerous ronin, happy to embrace his underdog status.

Halfway through the main card, Given Majuba hopes to continue his momentum with a win against HP van Staden, an athlete who is happy to stand and trade and who is yet to see past the first round in his entire professional career. This main card spot provides the opportunity for both fighters to prove themselves further and make an emphatic  statement to the other welterweights.

The same division features Peace ’X’ Nguphane, hot off of a superb submission victory and seeking to continue building his EFC legacy, taking on the highly experienced Bruno ‘The Major’ Mukulu. Nguphane’s dominance began in amateurs which he has successfully carried over to his professional career but Mukulu looks to halt that momentum and place himself in the prime spot for a potential championship opportunity.

The EFC 93 main card kicks-off with an exciting clash between Zambia’s Robert ‘Black Tiger’ Simbowe and the DRC’s Boule Godogo. The featherweight division continues to be one of the most competitive divisions within the EFC and at EFC 93, it’s expected that this curtain-raiser will be highly-explosive as both fighters look to climb up the rankings.

With 5 action-filled prelim fights and a main card that promises drama and violence in every bout, EFC 93 is set to become the must-watch combat event of 2022.