THE GORILLA’S REIGN OF DOMINANCE BEGINS 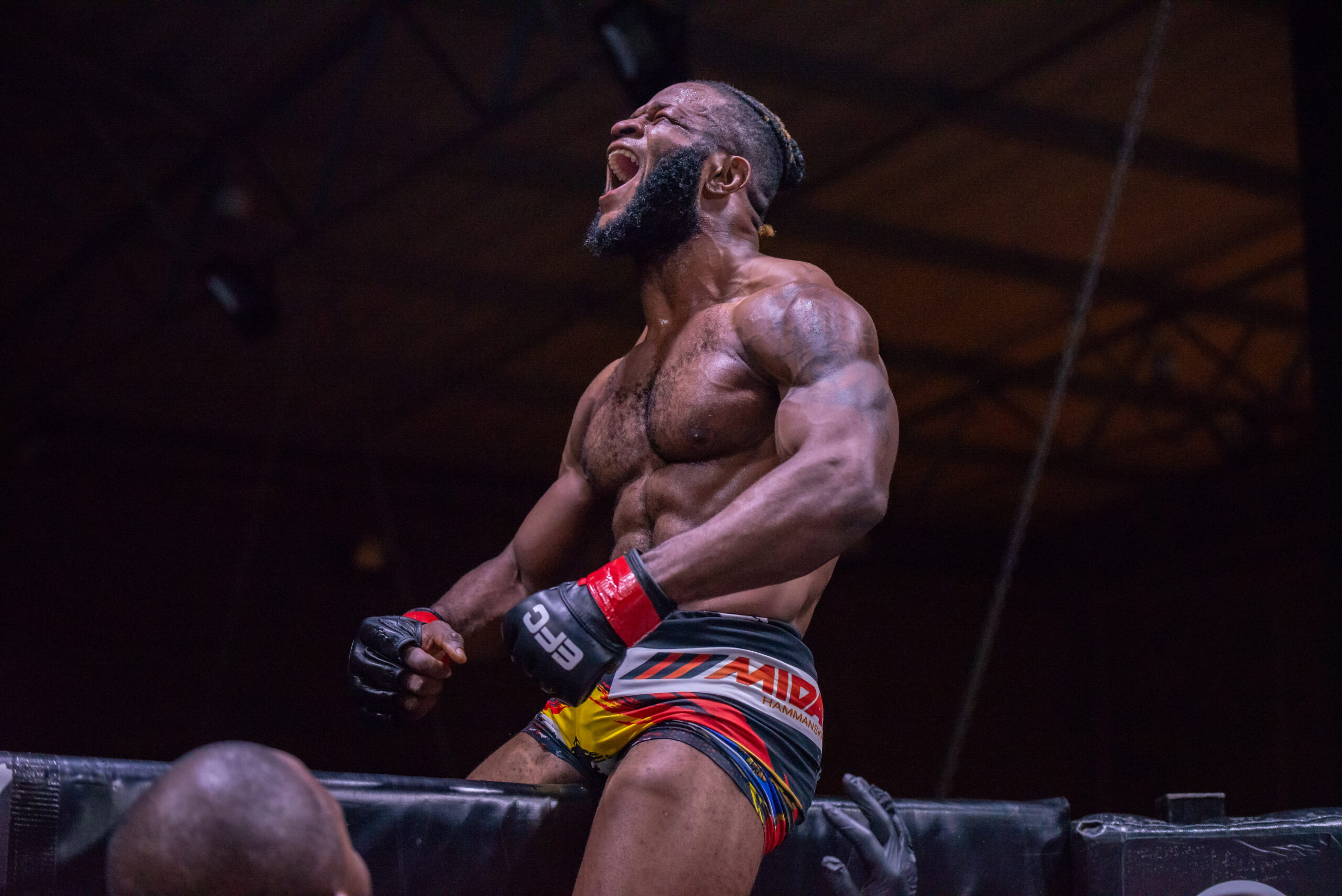 Johannesburg, South Africa – The roof blew off the EFC Performance Institute as Africa’s first and biggest combat sports promotion staged its 93rd event in truly spectacular fashion. A new force of nature in the global welterweight division emerged as the DRC’s Ziko ‘The Gorilla’ Makengele became the first person to ever knock-out the bookies favourite, Martin ‘The Punisher’ van Staden to take the 170lb gold and launch the crown into delirium. After two rounds of superior Hexagon control and displaying all the experience of a former champ, Van Staden was pulled into a firefight with Makangele and got caught with a massive overhand right and was sent crashing to the canvas. Several follow-up shots were purely academic as referee Bobby Karagianiddis pulled off the Congolese Judoka who immediately threw up his arms in celebration. Van Staden shook his head in disappointment, understanding as consciousness returned immediately that he may have deviated from a gameplan to exit the pocket more rapidly. ‘The Punisher’ remains one of the greatest fighters in the history of African MMA, and his future will be closely watched by pundits and fans both at home and abroad. As for the new champion, he credits his coach and camp, Conrad Seabi from Brothers In Arms in Tshwane as more deserving of the belt than he, but it cannot be underestimated how much a world title means to him as well as the people of Kinshasa. Continuing his undefeated streak and taking the gold in such impressive fashion, ‘The Gorilla’ looks set to usher in a new era of frightful dominance.

In the first time in African MMA history, there was a referee substitution after the first round, with Makangele inadvertently catching referee Wickus Swart with a left hook at the bell that sent the veteran arbiter to the mat. After being seen by EFC medical staff between rounds it was decided that Swart was unfit to continue which prompted the switch to experienced referee Karagiannidis to oversee the remainder of proceedings.

In the co-main event, Igeu ‘Smiley’ Kabesa made short work of Ashley ‘Padre’ Calvert to take the number one contender sport and book a rematch against the man who took his gold, the Brazilian standout, Reinaldo Ekson. Without giving Calvert a moments notice from the klaxon, Kabesa flew in with a flying knee that initiated a breathtaking chain of offense with a sweet hip-toss creating a scramble that led to a deep rear-naked choke that forced ‘Padre’ to tap with alacrity. Calvert expressed a sage and keen yearning to return to winning ways for the remainder of his EFC contract, whilst Kabesa must choose between a showdown with nemesis Ekson, or an international contract that must surely be in the overnight mail from Nevada.

Those two fights were preceded by an intense eight fights that saw several pro career debuts, produced some championship contenders, and even saw the fastest finish in lightweight history.

HP van Staden vs. Given Majuba via Submission (Rear Naked Choke) – Round 1

FIGHT OF THE NIGHT: Ziko Makengele vs. Martin van Staden